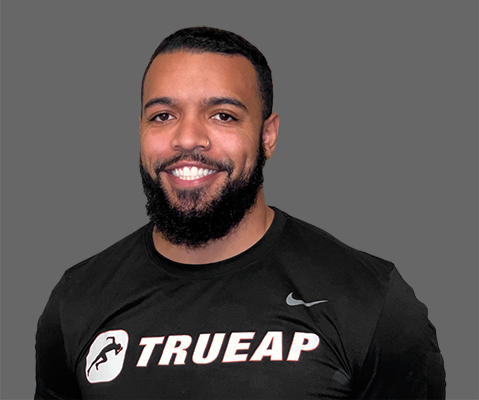 CJ Davis has always been passionate about his own athletic training. But it’s his background as a college football standout that helps him show other athletes how their performance in the gym translates to better play under the stadium lights.

A three-time All-American player at Division II Shepherd University, CJ held his school’s record for combined kick return yards. He stands 12th in all-time NCAA Division II history in kick return average, 20th in all-time punt return average, and was named the 2013 Beyond Sports Network Special Teams Player of the Year. After earning his bachelor’s degree from Shepherd University with a focus in Communications, he played professionally in the GFL for the Kiel Baltic Hurricanes.

CJ, who is a NASM-Certified Personal Trainer and also a boxing/kickboxing-style striking coach, appreciates the dedication and hard work it takes to excel in sports. “I joined the True AP team because the program supports athletes in becoming the sharpest and most explosive athletes they can be,” he says. “My goal is to help athletes of all skill levels reach their highest goals.”

find out more
Anyone know how to spell it?? 😭 Comment below